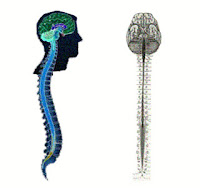 My name is Dr. Howard Wheeler.  I was a neurosurgeon, a scientist, a teacher,  father and cancer patient.  If you were to look me up you would find me in medical journals, newspapers, my doctors were on late night TV and daytime talk shows, I was the medical marvel of the age. It was hell.

Two years ago I was diagnosed with cancer, it metastasized far faster than anyone one expected. It hit stage four, it was inoperable and death was certain.   I could not passively wait for death.  It was in these disoriented weeks that a brash young college approached me.  He was known form an anatomy lecture I gave 10 years back, since then his team had made massive progress in tissue printing.

We knew the cancer had spread to nearly every corner of my body. But through the best MRI, and PET scans it appeared to have not yet found its way into my central nervous system.  This then became the foundation for Tyson Ingersoll team's strategy.

The proposal was simple in principle but insane in practice. Remove everything cancerous and replace it with clean pure new tissue. When I signed the consent form I could not imagine greater pain and suffering than what was wrecking my body, so I signed.  Consenting the use of three experimental technologies on my dying body.

At first I was weighed and measured in every way imaginable my bone volume measured to fractions of millimeters, my circulatory system measured with the same precision.  With every last detail of me mapped I went into the operating room.

This was anticipated and dreaded. The cancer was inoperable but the procedure would move quicker without excess tissue. I dreaded this because it was the most ordinary part of the process, it was within the realm of the imaginable.  I went into the operating theatre a man whose most severe trauma had been a sprained ankle, I left the operating room lacking ankles and much more.

I was never supposed to wake up after I went under the knife, not until the procedure was nearly done.  With so many unknowns that plan failed.

I came to on a gurney. Covered in sterile bandages I could not see the full extent of  the pruning. I could not move. From my limited vantage point hoses and piping was leading from my chest cavity to a massive bank of machines.

There was no feeling in my body and my arms and legs had been amputated as planned.   Panic struck me, I had no pulse and was not breathing.  I tried a deep breathing exercise to calm me but when my chest failed to  move in response the panic only deepened.

A calm came over me.  In the last moments before I lost consciousness I overheard   someone.

"I got some spikes on the EEG, so I upped the dosage."
"Good, lets not waste any time getting him into the Digestion Vat." With that I was out for an unknown time.

The Digestion vat was the first of the experimental technologies.  Technically it was this part of the process that fully cured me of cancer.  A special doping agent had been applied to my central nervous system to protect it from the tailored enzymes I would be bathed in for weeks while they decomposed my non cerebro-spinal tissues. The high glucose high oxygen environment kept my brain alive.

Second Awakening.
Blackness, an absence of any sensation.  The sensation that eons had passed dominated my thoughts.  Memories, of my family, my kids, and wife did nothing.  I endlessly came back to the feelings of blackness.  The boundary was gone, no longer could I tell if I was feeling nothing because I had nothing to feel it with or that there was no universe to feel any more.

The memory of the knowledge of the procedure failed to provide any solace.  Knowing I was in a tank devoid of flesh and blood was too abstract.  Heart stopping pain ended the lucid moment.

Again in the blackness.  Again the feeling mountain ranges had risen and fallen since I last thought.  There is pain now.  The pain has texture now.  An agony of phantom limbs, jellyfish stings and the aches of the worst fever you could ever imagine.  To scream in agony or to curl into a whimpering ball were beyond my reach. Buried in this agony was an uncertain feeling that I was discreet from the universe.  Inexplicably bliss came over me and reality was lost.

Much later when I was at last able to review the data collected during the procedure I was able to correlate some neurological activity with stages of the process I reasoned that this awaking had occurred during the period of peripheral integration.  As the grown tissues and bones were printed onto my brain and spinal column, nerves growing in the new tissues connected with their chemically marked counterparts the first signal they sent was pain.

A delirium. The heat, the chills.  It was so hot.  It felt like less time had passed and that it was a human time scale. My bones ached.  I had bones.  I had skin.  I could not move.  In the black uniform environment I was locked in the boundary of self remained uncertain.  My awareness grew to include knowledge of no pulse no breathing.  The panic attack and the flashback to the first moments after the surgery sent me over the edge and conscience was lost.

Records of the procedure showed that the tanks temperature was  elevated both because and to ensure the acceleration of tissue growth to speed up the process.

A crushing weight of ten thousand needles presses down on me.  Down and up have meaning again.  I test my eyes, an infernal whiteness has replaced the calming blackness I have spent eternity with.  I scream, or I thought I screamed.  I did not stop until there was blackness again.

I learned later that my panic attack during my first official awaking drove me to cardiac arrest and they were forced to grow a new heart for me. The recording of the recovery room showed me trying throw the bedding off of me.

My head is clear, I have no sensation of my body.  There is a faint light in the room.  I am clearly in a room.  Over a period of time that could have been hours, or days, but definitely not years or centuries sensation returns to my body.

A voice addressed me.  "Mr Wheeler, good morning.  Waking more gently I see.  I will need to run some tests on you, but soon we will  have you back in your old life."

I had a new body.  It was soft and pink hairless.  The same weight and size I had been before the cancer wasted me away.  It had been carefully grown from cloned cells and cleaned of the mutation that produced the cancer.

Recovery was slow.  After 10 months without sensory input the very world was traumatic, too much noise light and texture to take in.  My wife came by soon after the Dr. ran his tests.  I could remember our love and our life together but only had the faint recollection of the feeling.  When she held my hand I recoiled from the alien stimulus.  When she looked into my eyes I knew she had seen the blackness keeping me company. It would be a long time before we spoke again.

I don't sleep any more, only cat naps when the strain gets to great.  The blackness is always waiting.

It took years to relearn how to live in a body.   In truth it always takes years for the brain and the  body get used to each other, normally this is called infancy and the child benefits from a lack of any reference points.

Now I write this account. In the hopes of saving the vain from from themselves. They say I am a miracle and this will pave the path to immortality, but they don't know how to stop the pain or the blackness.
My name was Dr. Howard Wheeler.  I was a neurosurgeon, a scientist, a teacher, father,cancer survivor, and Regrowth's first victim.